Avaya Engagement Designer provides a graphical user interface that makes it easy to "draw" custom snap-in service applications and business process workflows. Although a basic knowledge of JSON and JSON schema is necessary for manipulating variables and interacting with REST clients, Engagement Designer is primarily intended for use by Business Analysts and other non-developers.

In addition, developers can create their own dynamic tasks for inclusion in workflows.

The Engagement Designer user interface includes a palette of available events, tasks, decision gates (known as "gateways") and data that are dragged onto a canvas and linked to construct a Workflow Definition.

An Event is something that occurs at the beginning, during or at the end of a workflow. Engagement Designer supports the following Event types: 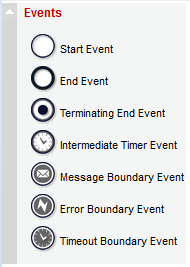 Tasks represent individual actions that are performed as part of a workflow. The following types of task are supported: 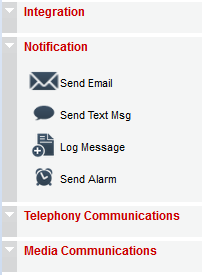 Gateways defines decision points in a workflow whether different paths may be taken depending on whether specified conditions have been met. Engagement Designer supports exclusive, inclusive an parallel gateways.

Avaya’s Website may request cookies to be set on your device. We use cookies to let us know when you visit our Website, how you interact with us, to enrich your user experience and to customize your relationship with Avaya, including providing you with more relevant advertising. Please click on the different category headings to find out more information. You can also change your cookie preferences at any time. Please note that blocking some types of cookies may impact your experience on our Website and the services we are able to offer.

These cookies are strictly necessary for the Website to function and cannot be switched off in our systems. They are usually only set in response to actions made by you, which amount to a request for services, such as setting your privacy preferences, logging in, filling in forms, accessing secure areas, etc. These cookies do not gather your personal information that could be used for marketing or remembering where you have been on the internet. You may block or delete these cookies by changing your browser settings (as described under the heading “How Can You Control Cookies?” in the Cookie Statement), but then the Website will not function properly.

These cookies allow us to count visits and traffic sources so we can measure and improve the performance of our Website. They help us to know which pages are the most and least popular and see how visitors move around the Website, whether they receive any error messages, etc. This information is mostly used to improve how a Website works. For clarity purposes web analytics are included into this cookie category. These cookies do not store information directly identifying an individual, but are based on uniquely identifying your browser and internet device (including other technical details, such as IP address, operating system, internet service provider, referring website, etc.). If you do not allow these cookies, we will not know when visitors have accessed our Website and will not be able to monitor its performance.

These cookies are used to make advertising messages more relevant to you and your interests. They also perform functions like preventing the same ad from continuously reappearing, ensuring that ads are properly displayed, and in some cases selecting advertisements that are based on your interests. These cookies remember that you have visited the Website and this information may be shared with other companies (e.g., advertisers, ad networks, etc.). In addition, targeting or advertising cookies may be lined to the Website functionality provided by the other companies. For further information please see the section of the Cookie Statement entitled “Targeted Online Advertising”. These cookies do not store information directly identifying an individual, but are based on uniquely identifying your browser and internet device (including other technical details, such as IP address, operating system, internet service provider, referring website, etc.). If you do not allow these cookies, you will experience less targeted advertising.